Thought of the Day…Do you cringe when you hear, “What’s for dinner?” I do. Hopefully this will help.

If you’re not familiar with them the McCormick Recipe Inspirations are a collection of small spice packets (no salt) and an attached recipe. I bought one of each of the different packets I could find at the store so I would have them.

Each packet has six spice containers and a recipe card on the back (shown below). Each recipe card lists the spices and amounts so that you can recreate the dish later.

I saved a copy of Jaden’s recipe and put it and the recipe card in a sheet protector. 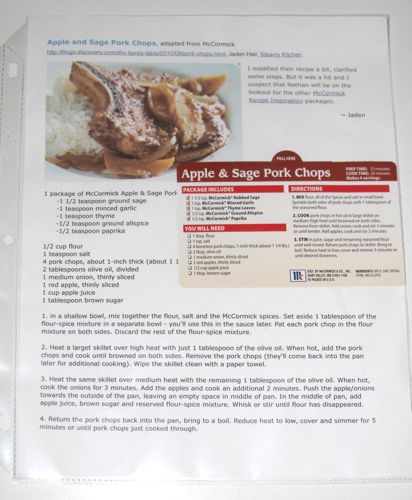 Here’s my end product…. I was rushing dinner so I didn’t have to time take pictures, but here is my plate. I served the pork chops with brown rice and veggies (which seem to have been camera shy)… 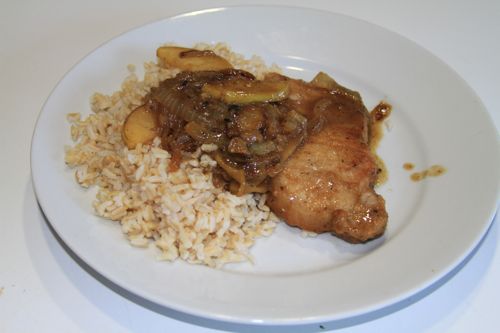 I must admit, I was a bit disappointed. Hubby and The Offspring both liked it, but it wasn’t “applely” enough for me. Is “applely” even a word?? I don’t think so because there’s a red squiggle under it in my editor.

I used her recipe but had a couple of changes. I bought boneless pork chops and substituted an ingredient because I missed it when going to the store… I unwisely didn’t have the apple juice (only sparkling juice and forgot about that)… (note to self… water is NOT a substitute for apple juice. DUH!!! 😉 )

Since Hubby and The Offspring both liked it, I’ll make it again and make sure to have apple juice on hand. I’ll post an update.

I will also try the other packets I purchased and let you know how they turn out. Here’s what we have to look forward to: Quesadilla Casserole, Shrimp & Pasta Primavera and Spanish Chicken Skillet, but most of all I am looking forward to the Rosemary Roasted Chicken with Potatoes. 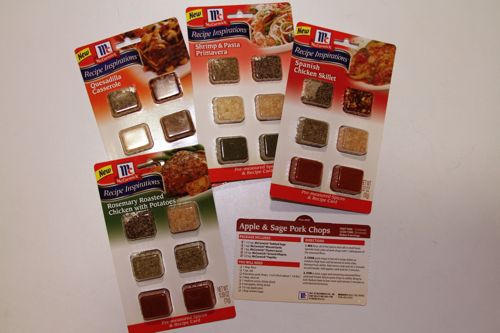 Have you seen these packets? Have you tried them? How were your results?