Thought of the Day…I am the inferior of any man whose rights I trample under foot. Men are not superior by reason of the accidents of race or color. They are superior who have the best heart – the best brain. ~Robert G. Ingersoll 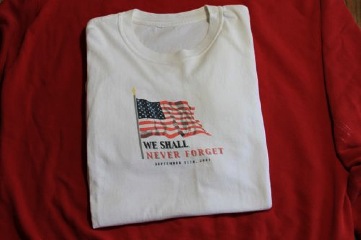 I remember waking that September morning just like every day. Just like every morning, I got up and went to cuddle with The Offspring. We were talking about the song on the radio. Then the news guy came on the air and said, “A plane just crashed into the World Trade Center.” I sat up in shock. The Offspring was a little girl and didn’t completely grasp what had just happened.

Was this an accident? How could that have happened? I thought to myself.

I sprang up and ran to tell Hubby. I flipped on the news and as I stood there I saw the most horrific thing I could imagine on live TV… the second plane hit… My legs gave out and I sat on the bed staring at the TV with my mouth hanging open.

Then my mind was even more shattered… 30 minutes later… a plane crashed into the Pentagon. I froze in my tracks… Did any of my friends just die? I used to live in Washington, D.C. and I started crying and my heart ached.

At work I found out that a good friend’s brother-in-law worked at the World Trade Center and they couldn’t reach him… Many hours later we received word that he had walked out of the city.

I can’t believe it’s been nine years… Much has changed in the world… much has not. There are people hating other people for differing religious points of view… hating people because they’re different… Why? I don’t understand why we as human beings can’t just get along. Why do we have to be a destructive species?

I try to live my life with respect and compassion… We all will have to answer for our sins someday. I don’t want to have to be ashamed of my actions.

Be kind to our fellow humankind… Love one another, please.