Each year we reflect on those special moments from the past year. I have so many they sometimes get lost in the hustle and bustle of my general life. Especially recently… the Remodel has completely consumed our lives [and my blog] for the last three months…

For welcoming in the New Year, I am snuggled up with a cup of Herba Tussin tea (to help my awful cough) and a warm blanket enjoying my FAVORITE MOVIE of all time… 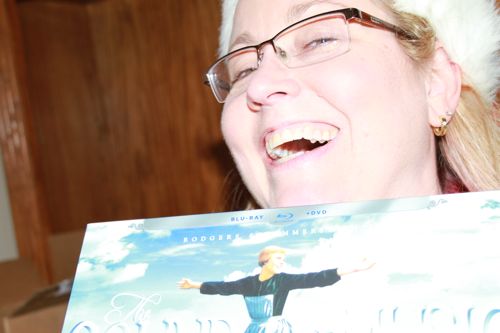 Thanks, Hubby and The Offspring, for my WONDERFUL Christmas gift! The 45th Anniversary Collector’s Set of The Sound of Music… (only 250,000 copies were made, at least that’s what the box states – it’s Blu-Ray and DVD plus an anniversary soundtrack edition with songs my other copy doesn’t have, including Lea Michelle from Glee’s My Favorite Things reprise)

I actually watched it twice tonight (yep New Year’s Eve)… first in regular mode and second in My Favorite Things mode learning all different bits of trivia contacted on the Blu-Ray disc! 😀 (Including Sing-a-long captions… too bad I start coughing when I sing! Didn’t stop me though! 😆 )

My recipe for happiness… take three hours (five if you stop to blog about it along the way 😉 ) out of your busy life and sit and watch The Sound of Music! You’ll feel so good inside!

The Sound of Music trivia:

I wish you a VERY HAPPY NEW YEAR!

Quiz time… Do you know the five animals listed in the song “My Favorite Things”?

P.S. My second favorite… also another Julie Andrews film… Mary Poppins! I still have my Poppy Poppins doll… I remember getting her for Christmas… she was hanging from the curtain rod… guess how young I was when I got her?! (hint… it is my earliest memory)

7 thoughts on “Happy New Year and My Favorite Things Trivia and Quiz!”