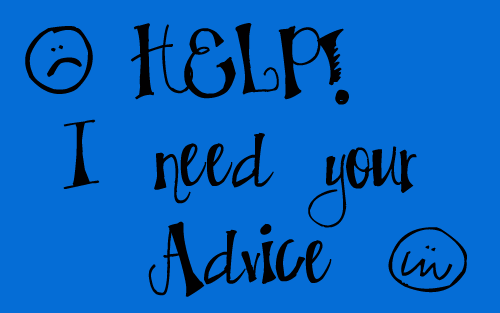 I have been reluctant to write this post… I have started it multiple times since November, but just couldn’t bring myself to publicly make myself look like a nut job. Oh wait! I think I’ve already done that so what the heck… here I go again…

Please bare with me as I layout my insanity defense… 😉

Flashback to way back when… forever ago… OK, it was only last April (seems like an eternity it’s only been seven months) my friend Rafael convinced me that I needed a Le Creuset French Oven… not the cheap knock-off I’d been eyeing at Costco… not the Martha Stewart one… but the real deal… Rafael told me that when he moved to Colorado that he bought one of their ovens at the nearby outlet store on sale for around $150-160 and that even though it was from the outlet, Le Creuset still honors the lifetime warranty. I paused… The one at Costco didn’t have that kind of warranty… So for about $100 more I could have a really great pot with a lifetime warranty?!? COOL!

I had been in the store before but just couldn’t justify spending the money. Then… trouble hit…

In late April I was fortunate to meet the-one-and-only Pioneer Woman when she was on her cookbook tour. Remember this? It is from my first official blog post?! 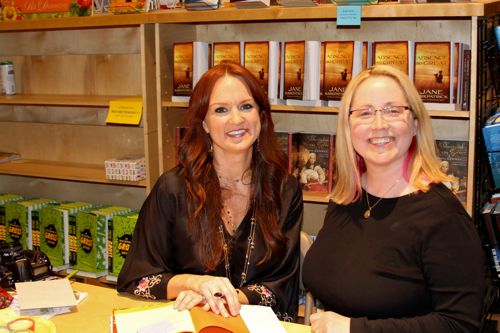 In our ever-so-brief conversation, I asked her “What is the best size for a Dutch/French Oven?”  Her reply, “I can never keep the quarts straight.  Just get a big one.”  “Round or oval?” I asked.  “Round, they fit better on the burner.”

I decided that’d I’d get 7.25 quart oven. When I called our outlet store to find out if they had the 7.25 quart on sale. NOPE. I decided to wait.

May 1st rolled around and I checked the outlet stores’ web site. And they had a special going on that if you spent more than $200 you got 25% off and if you spend more than $300 you would get 35% off.

I knew that with the pot and stainless handle I would be over $200. So… as I mentioned in my Something I’ve wanted for a long time… post I talked about how I was able to get 35% off and bought the red 7.25 quart oven and 2 quart multi-function pan which I ended up getting for $10.00 (yes, ten dollars). They added me to their preferred customer mailing list… 😉 THIS event changed my kitchen F-O-R-E-V-E-R! Preferred customers get extra discounts from the normal sale prices! 😀 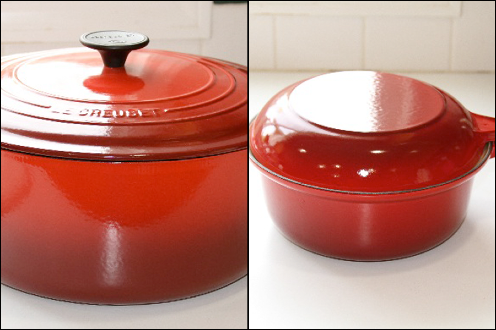 Then I received the June coupon! I couldn’t resist the sale for the new Caribbean color and bought the Dijon 5.25 quart oven and Caribbean 10 inch skillet…

In July on our way back from Colorado I stopped in the outlet mall and wouldn’t you know… another Le Creuset store! I didn’t have my coupon, but because I was in the computer, I was able to buy product in Colorado at the preferred customer discount and they would ship it to Oregon tax-free and free-shipping! At that point, in my Kitchen Equipment Vices post I admitted I was a Le Creuset Addict. 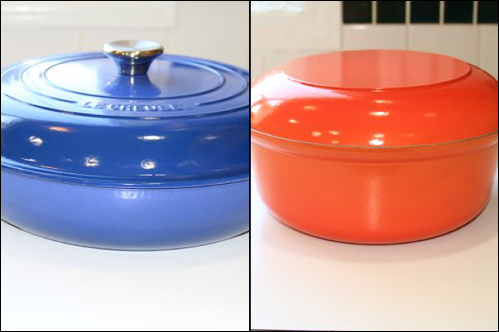 At that point I thought I was done… I even said so in that Vices post… I said, “…until the pretty purple colored one shows up at the Le Creuset Outlet!!”

In October, as I discussed in my Ooops, I did it again I was looking through my Cast Iron Way to Cook cookbook and saw that there was a 1 quart multifunction pan. I called the store and they didn’t have it. So I hit the internet and low and behold I found one on eBay. 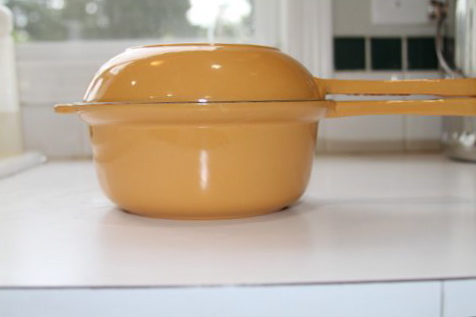 Well… the pretty purple one still hasn’t shown up… don’t expect it for a couple of years (at least that’s what our Outlet said)… So why am I writing?

In November ,we went to the outlet mall for some Christmas shopping… (for my faithful readers, you know where this is going… don’t you????!!!) For those who are new followers, the problem with going to the outlet mall is that there is a geometric force which tugs at me… The Mother Ship as a Hubby likes to call it (wait, no NOW he calls it “My Crack Store”)… I prefer The Mother Ship… To “normal” people, it’s The Le Creuset Outlet Store, but for me… an addiction!

Where am I going with this??? I had a coupon… OH YIPPEE!!! I went to The Mother Ship for a grill pan and panini press… The didn’t have the panini press, but I did get these… 😉

The Citron grill skillet for 40% off!

…and Dijon and Caribbean warming trivets also for 40% off!… (yes, those are tea light candles)

Then Hubby and The Offspring surprised me at Christmas with a gift certificate to… you guessed it… The Mother Ship! 😉 The January coupon talked about a limited edition Azure color. OH NO! A color I didn’t have!!

They had $29.99 Azure tea kettle (regularly about $100). My tea kettle needed to be replaced… so for about $30… I was sick the week following Christmas and the beginning of January so I wasn’t able to get down there. I called the store two weeks ago and they were out. 🙁 We drove down there this past weekend. It was my first big outing since my fall. It was difficult to walk, but I went to only one store…

They had the tea kettle… 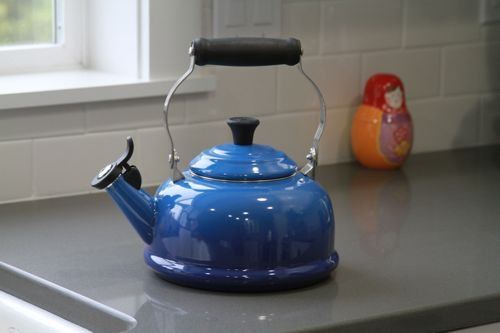 …and these cute pink sparkly mini spatulas. The spatulas are heat resistant to 800 degrees Fahrenheit! 😮 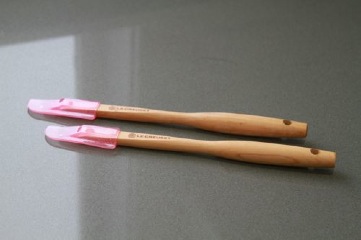 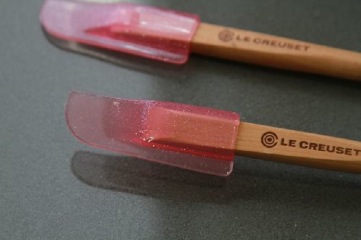 I forgot my gift certificates! UGH! It’s OK though, I got a 40% off coupon because I purchased the tea kettle. So, I could go back for another trip… they had the panini press so I was enticed to come back. Well… thanks to Hubby taking me down there I got the panini press… 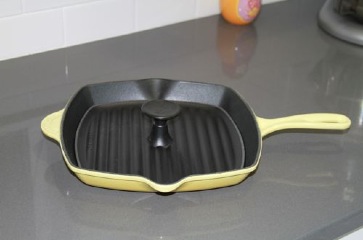 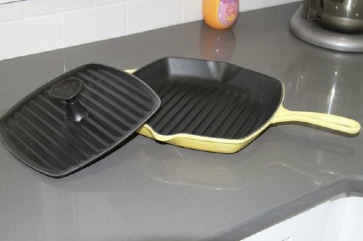 That night I fixed tenderloin steaks we received from Ma and Pa. OHHHHHH!!!! They cooked GREAT in the grill skillet with the press! 😀 Thanks, Ma and Pa!

I almost bought a wok… but didn’t! Are you proud of me for my restraint? 😉

What do you think? Do I need to be committed?