I have a bit of OCD (obsessive compulsive disorder). Not so bad that I have to turn the handles so many times, but have been known to straighten an picture frame when we’re out and about. 🙁

Since the remodel, I have been trying to organize things. 😀 About a week ago I had a friend over and offered her some tea. I walked to the pantry closet where it has been store for 15 years. Started pulling it and it kept coming and coming… we giggled. We laughed more because when I put them on the counter, I had arranged separated them by caffeine free and caffeine and then put them in alphabetical order by brand and within each brand I alphabetized them! Like I said before… OCD!

After we each got our respective tea bags I put it all back. DUMB! Then I wanted a second cup… I offered my friend another cup. … You guessed it… I pulled it all out AGAIN!! This time we cracked up. 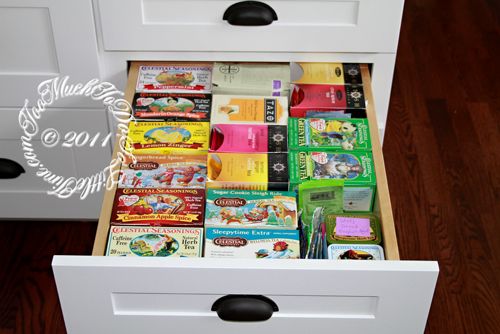 As you can see, OCD again… from the front left moving backwards… there’s a pattern… alphabetic by brand and flavor with caffeine free on the left and then caffeine teas are separated by green and non-green… Bad news is that these aren’t all the teas we have. I have the Traditional Medicinals and “over stock” (aka duplicates) in the pantry.

If you think that’s bad… here are my spices… with the exception of the ones I’ve tucked on the side or in the “holes” at the back… OCD hit again! I have “overflow” in some other locations (pantry), but they’re organized similarly. 😉

Is this “mild OCD” or something more serious? So, do you think I need to be committed?

9 thoughts on “Teas and Spices with mild-OCD”