First let me apologize for my delay in posting this… it has been a work in progress… no, strike that… I just was so overwhelmed that I didn’t want to finish it… doing so would cause me to relive a terrible day. So please for now, pretend this was a few weeks ago… OK? Thanks!!!!

Not too long ago I had such a bad day that I came home from work and cried. In retrospect it really wasn’t my worst “work” day, but it was just “bad”.

If you have been reading my blog for a while (or even looked at my menu bar) you are aware we had a long (LONG) unplanned remodel. Well, as a result we lived out of boxes for a VERY long time. It was, and still remains, an overwhelming nightmare. Especially since we were trying to following the FlyLady’s Baby Steps to get our house in order and work our way out of CHAOS (Can’t Have Anyone Over Syndrome). It is driving me crazy! Sometimes I think literally.

At work, to save money our executive team decided that we’re going to merge two of our office buildings. As part of this move it means “downsizing” cubical space into more of a “bullpen” environment. Because I am a “techie” and had users in two locations I had two offices and had to cram all my stuff into one small cubical. 🙁 We were supposed to sort/recycle/toss crap before the move. We had to have our offices packed by this past Friday because the move was happening on Saturday.

I was really busy before the move. I didn’t have time to do a full sort/recycle/toss before the move… which meant all the remaining crap was moved. UGH!

When I walked into my new space I just wanted to cry! I was so completely overwhelmed and just wanted to throw up. I was 75% unpacked and my “bullpen-mate” Dude couldn’t effectively use his space because he’s a “lefty” and the office is better suited for a “righty” (of which I am). Being the awesome friend I am I said I’d switch places with him. 😀 This meant moving the stuff I’d unpacked to his space. At least I didn’t have to re-box it! One big plus is that I have now have an adjustable desk. This means that I can have my desk at a lowly 27.4 inches or raised so that I can stand. 😀

This is Kim and her hubby – forgive the quality I had to take the pic fast because neither of them wanted their picture taken. 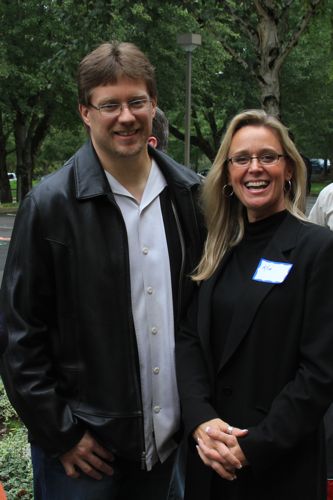 Well, Dude and I have a wall as our third wall so we wanted to get a two-drawer file cabinet so we can put a white board on top of it and split the two drawers. I contacted Kim again as she was in charge of the move to see if we could get the cabinet. Kim came through with flying colors!! THANK YOU, KIM!!! 😀 I had to ditch my “guest” chair, but Dude said then maybe our “guests” won’t stay long. LOL!

By 4:30pm I was so sick of unpacking I stopped and just sat there numb and on the verge of tears. I had a box to go home (and two still to bring in – UGH!)

On my drive home I called Mama and started tearing up – I was frazzled. By the time I got home and was fixing dinner I was in tears. Hubby listened as I drank a glass of sweet red wine (not very good wine BTW – won’t be buying it again). (Emily, if you’re reading this… I need your recommendation for a good sweet red wine. THANKS!)

Monica over at Monica Wants It posted a review of the four natural ingredient Coffee Mate’s Natural Bliss Vanilla. Monica discovered this FOUR ingredient wonder at BlogHer ’11. I couldn’t wait to try it.

Monica had a drawing for five people to win. I’ve entered several blog drawings… Guess what?!?!? I received an email from Monica letting me know I had won. Yep, I finally won something! I was so totally stoked!! This win plus Kim’s awesomeness made the end of my terrible day not quite so bad.

I received Monica’s envelope with two coupons, her business card and a note (doesn’t she have awesome handwriting? I’d love that as a font). As you can see below, I bought the Vanilla. It is soooo yummy! I love that it is only FOUR ingredients! There are two more flavors (Caramel and Sweet Cream). 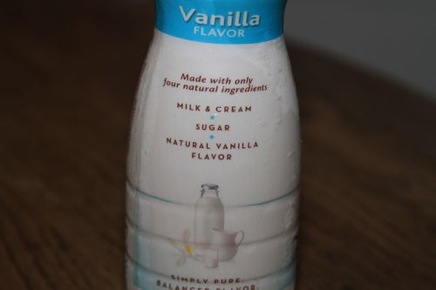 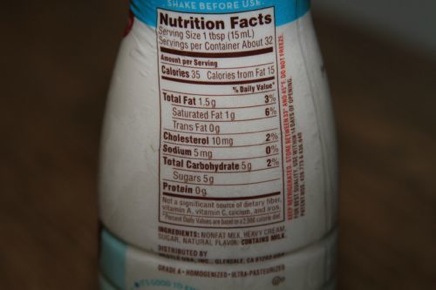 I haven’t decided which other flavor I am going to buy… decisions… decisions… What do you think? Be sure to look for Coffee Mate’s Natural Bliss Vanilla in your grocer’s dairy section.

THANK YOU, Kim and Monica, for making my terrible day not so bad after all.

Have you seen this? Have you tried it? If so, which flavor and what did you think?

8 thoughts on “The End of a Terrible Day”