If you recall my friend Nicole helped me out with her guest post a couple of weeks ago after my step mom’s passing. Well, she and her husband, Prince Charming (she calls him this on her blog) did something else that The Offspring and I felt was pretty amazing… the sign of a true friend. Before I go into the details, let me fill you in on Nicole’s and my friendship…

For the longest time, I had wanted to blog. I fell in love with the idea after reading Pioneer Woman’s blog for over a couple of years. Whenever I would cook, bake, take a photo or just about anything I thought in my head just what i would write if I only blogged. Well, as I mentioned in my first-ever blog post I met Pioneer Woman while she was in Portland for her first cookbook tour. Not too long after that I had a new regular reader. You guessed who, that’s right… Nicole! She found me from Pioneer Woman’s post about her stop in Portland. We each started reading each other’s blogs.

Nicole and my friendship grew. We started with blog comments and then moved on to private email conversations and then instant messaging/chatting and eventually talking on the phone which then led to texting. Then we took the “big step”… we opened up more of our personal life… we became Facebook friends.

It seemed so natural; even for a city girl (me) and a country girl (Nicole) we got to be great friends. Nicole has helped me by writing a few guest posts and offered advice when I needed it and visa versa.

I can’t image my life without her in it. Granted we live half a continent away from one another, thanks to the internet we keep in near daily or every other day contact.

Nicole is often one of the first people when I think of sharing news. She is also someone I know I can shoot a quick email to gripe about something. I know (at least in my head) that I can turn to her. Well, I’d say that Nicole fits into many of the definitions of “a friend”. I personally don’t care that we live far away. I love that technology lets us be “close”. Remember the days of “pen pals” when you’d wait by the mail box for a letter?

In fact, she and I keep in touch more than three of my siblings five siblings–you guys know who you are. I get that you’re busy, I’m busy, too (hence the name of my blog). But how hard is it to send a quick email or text to say, “Hey there, Stef, I was thinking of you. I hope you’re having a good day. Love, … “? Granted I’m guilty of some non-contact, too… But when my emails, texts and phone calls go unanswered; I stop reaching out.

OH CRAP… sorry… this is about Nicole not a time for me to bitch about family not keeping in touch… SORRY!

Anyway, I reached out to Nicole when The Offspring and I headed back to my home state of Missouri for my step mom’s funeral. I was going to be “relatively close” to her and wondered if we could meet face-to-face. Maybe there would be some place between us where we could meet. Unfortunately the “middle” was really in “the middle of no where” so since Nicole and Prince Charming weren’t going to have his daughter for the weekend they offered to drive closer to where we’d be. They said it was no problem, but I REALLY appreciated it!

Nicole asked if we liked Italian; to which I said, “Yes!” So, we made plans to meet at Zio’s Italian Kitchen for lunch on the day we were headed north back in the direction of the airport and to visit Mama who also had to drive over three hours to see us.

After the funeral and visiting family, The Offspring and I headed to Zio’s to meet Nicole and Prince Charming. Jeeves (my GPS) said we were only 7 miles, but I thought we were at least 30 minutes from there so I started searching via my iPhone and on the GPS. That took much longer than I had hoped.

I finally gave up and trusted Jeeves. After accepting the location Jeeves found it then calculated 35 minutes! ARGH! The 7 miles turns out to be “straight as a crow flys”… What a way to make a “first impression” … by being late!!! I HATE being late!!!

As we headed to Zio’s, Jeeves wasn’t letting up on his constant reminder that I was late. Nicole sent me a text message and I asked The Offspring to read it. They were there! She said to let her know when we got there and she’d meet us at the door. UGH! LATE! UGH! I asked The Offspring to reply back that we were going to be late. She said no worries.

When we finally arrived, The Offspring sent Nicole a text. When we got to the door, there she was waiting for me (I mean us). I gave her a big hug. It was soooo great to meet her in real life!!! I had The Offspring take a picture of us. (Nicole’s on the right) 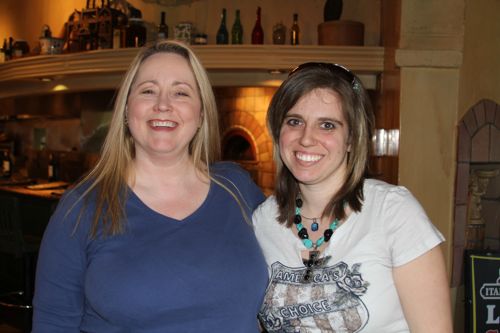 Afterwards, we headed to our table and there was Prince Charming. We asked Nicole and PC what they recommended and they said that they had ordered the Tomato Florentine Soup and Chicken Parmigiana. Sounded good to us, so we ordered the same.

We sat and visited until our food came… oh yeah AND enjoyed the bread and dipping oil which was extra virgin olive oil with house spices. The spices were SOOOO TASTY. Nicole and PC said that Zio’s sells the spices to go. So I ordered two bowls of it to take home.

When our soup arrived, the waitress joked, “OK, who gets the Tomato Florentine Soup?” We all laughed. The same thing happened when our Chicken Parmigiana arrived. Doesn’t this look tasty?

Now, three of ours looked the same, but Nicole’s looked like it had a tail (below is a picture I stole from Nicole’s blog post about our “first date”) 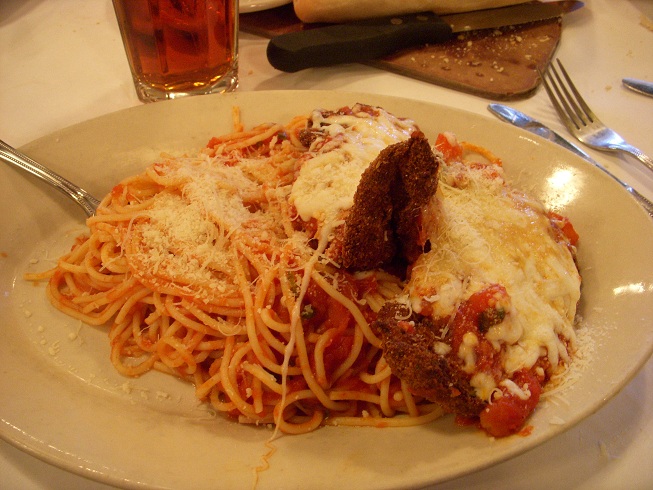 We ate and sat and talked for nearly two hours or more. It was just like we’d been friends forever! Here we four are after dinner. Just look at all our leftovers and our spices! 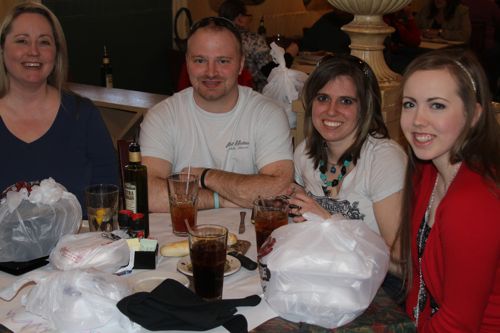 While we were eating our wonderful lunch, I found out that TBug (PC’s daughter) didn’t go out of town and Nicole and PC didn’t want to change their plans with us. I felt so bad. I know they don’t get to see her as often as they’d like. Then I felt honored.

Thank you, two, so very much for such a wonderful visit!! I realize that in the grand scheme of things we traveled further, but it’s not like we were “in” your town either. THANK YOU!!

Now, how do you define a “friend”? My definition… someone who gives up seeing their daughter to drive over two hours to have lunch with someone they met on the internet.