Sorry I am late in writing today. Things have been a bit off for me since I lost my job. Some things I’m spot on, but others I’m really “off my game.”

As I go through our home I see things that have been neglected for quite some time. I’m slowly getting to things, but it is a REALLY slow process.

What does all this have to do with “Semi-Lost Art and Homemade Gifts”? It has to do with something I have had sitting next to (behind) the couch in the family room for quite sometime.

Yep, that’s my knitting bag. Yep, you heard me right, I knit. Sounds odd, right? In the nearly two-and-a-half years that I have been blogging I have NEVER shared that I knit. Strange, eh? Sorry!

Let’s go back in time for a bit…

When I was in junior high school, actually seventh grade, we either took “home economics” or “industrial arts”. Everyone took either set of courses. If I had never shared my age you would have just figured out that I am of a different era. LOL! Strange how things have changed. Now, kids graduate without knowing how to cook or sew or do a budget. Granted they can learn at home, but in our busy schedules some head off on their own without the knowledge of knowing how to sew on a button! (BTW, Offspring, I think I taught you. If not, I will when you’re home for Thanksgiving!! At least you know how to cook! 😉 )

Anyway, in “home ec.” I learned how to knit and crochet. I didn’t really knit after junior high. I did crochet a couple of large blankets in college, but didn’t really think much of the “yarn arts” after that.

Jump forward nearly 27 years… to the summer of 2004 and The Offspring was playing her first summer of completive (travel) softball. One of the things about being a parent of a completive softball player is that there is a lot of “downtime” during tournaments… basically between the games there’s not much to do. Well, one of the moms (Ann) brought her knitting – she made purses and winter scarves and sold them. Needless-to-say, many of the moms were fascinated; most of them had never learned to knit. I was really surprised. We were all about the same age. 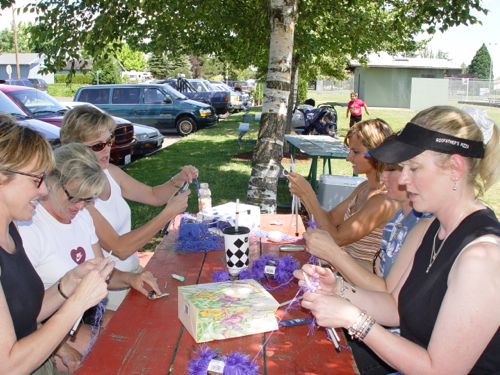 Can you spot me? Please remember this was eight years and several pounds ago. 🙁 Yep, that’s me in the black on the right.

You know the old saying about never forgetting how to ride a bike… the same holds true for knitting! 😉 Knitting scarves is really easy, a little time consuming if you make a long one (the longest I recall making was over close to 8 feet [~2.5m] long). That summer I made several scarves. Since the scarves were basic “garter stitch” they went fast – except for those long ones – I wanted to learn more.

Knitting is basically combining the “knit” and “pearl” stitches to make a pattern. Those came back to me without even blinking an eye. I could do the knit stitch without even looking at my knitting needles. So, Ann suggested that I make dishcloths/washcloths. Making one dishcloth for each pattern. Then I’d have “samplers”. Cool idea I thought.

I gave my first few washcloths away. Silly me, didn’t get photos of them; and the ones I did take photos of are, as you will see, when they’ve been used quite a bit. 🙁 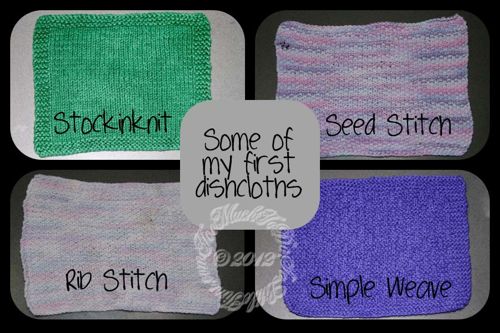 I have quite a bit of yarn stashed away. Many I found on sale and with the complete plans of making gifts for people… well, as usual I had too much to do and so little time. I even bought some absolutely beautiful yarn to make a wonderfully soft blanket. I have it started, but with the pattern it proved too hard to do when traveling AND given how much the yarn cost I didn’t want it to get too dirty at the softball field.

Over time, I slowed down quite a bit … even to the point that my knitting bag was collecting dust. 🙁 Anyway, I’ve started again… this time hoping to make some gifts. I thought it would be nice to share with my readers along the way. I find knitting relaxing so I plan on doing it each evening to help me unwind from the day.

Hope you won’t be too bored.

My knitting “Cast of Characters” are: yarn (duh), knitting needles (size, length, type all dependent on project), “Peg-It” Knitting Counter, row counter (not shown) and last but not least the pattern (I keep my handwritten patterns and notes in a small notebook).

I have a few patterns in my notebook, but also an old page-a-day knitting calendar. I also bought a few pattern books and subscribed to Creative Knitting Magazine for a few of years. I kept them because they had some nice patterns – you know… just in case. 😉

I’ve started a new project, but am not far enough for you to see the details. You’ll see my needles look different than those above. These are circular needles. I’ll discuss these particular needles another time. 😉 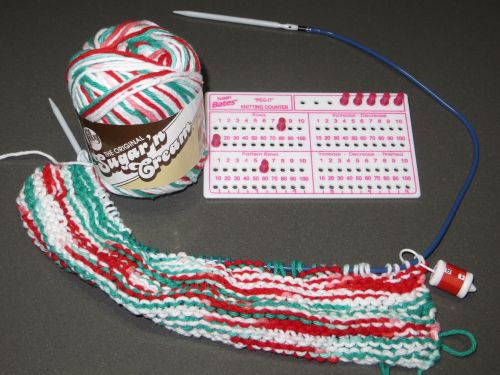 You notice that my “Peg-it” shows I’m on row 18 (top left) and in the sixth row of my pattern (bottom left). You ‘ll also notice I do have another row counter on the needles. This way if my pegs fall out I still know how far I am. 😉

As my get further along or finish, I will show you. I need to knit a new scarf. I had a 5 foot scarf, but left it at a restaurant last Thanksgiving while we were visiting my in-laws. When I called back, within an hour, they claimed it wasn’t there… B.S. if you ask me… it’s hard to miss a FIVE FOOT SCARF draped over a chair! My father-in-law said someone really liked it and stashed it for themselves. I’m sure he was right, it was really nice!

Well, I hope I didn’t bore you completely!

Do you knit or crochet?