I’m back! 😀 Yeah, I know, very rude of me to just drop off the planet like that. I’m sorry. Let me fill you in.

Several months ago, someone asked me how I was doing. My response was, “Still unemployed, but I am learning something new.” It felt good to say that. My stresses were in different areaa, like learning to write iPhone apps, but I really was actually doing OK. In additiona to looking for a job I was trying to work on my iPhone app. Remember my post My First Ever iPhone App, well I have been working a commercial app. Not full time, so it is slow to go.

During my unemployment, I learned can’t control life, but I can control my attitude towards it. I’m looking at this experience as though my glass is not half empty, it’s full of possibilities. If I focus on the negative, I may miss something important.

My life has had a lot of ups and downs; but I’ve always bounced back. The last twelve months are no exception. Being unemployed sucked big time, but I persevered.

Did you catch that?

I said, “sucked” not “sucks”. Past tense… yep, that’s right I found a job!! 😀 It was actually a few months ago and that’s part of why I haven’t written.

Let me fill you in… 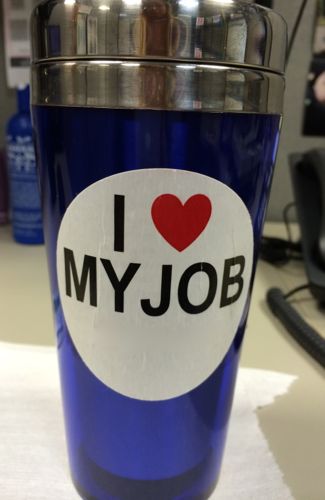 A few months ago, I went to one of our utility companies and while I was waiting I looked up jobs. At first I felt really silly because I hadn’t even thought of looking at the company for jobs. Nothing had come up there during my search. While sitting there looking, I saw there weren’t any in our area. Although we can’t move out of state because of Hubby’s job, I looked at jobs in another state. It turns out they had a job posted in a different state but the position could be in any of several states – including Oregon! When I got home I got to work and submitted my resume. In less than two business days I received a call from HR! In my entire career I have never received that quick of a response. Needless-to-say, I was totally happy.

A few days later, the HR lady called back and setup an interview with three supervisors. The interesting thing about this interview is it was going to be on the telephone. I felt the interview went pretty well. At the end of my interview, I asked what the next step would be the supervisors told me that it would be a couple of weeks before I heard anything. The next day I heard back from the HR lady… I made it to the next round! I was stoked. I had my interview two days later, the two managers I met with told me that it would be a couple of weeks before I heard back. After it ended, I felt like I blew the interview. So much so, I sobbed afterwards and told Hubby that I blew it to which he replied so supportively, “It’s OK, you’ll find another one.” I kept looking for a job in the meantime… After a week later, The Offspring and I were watching a movie and the phone rang. It was one of the managers from my last interview. She offered me a job!

After the normal “pee in the cup” and background check, I started a few weeks later.

Let me tell you this… I LOVE LOVE LOVE my job, my teammates, my boss and her boss and my company!! In the last four months I have not met a single person who doesn’t like working there.

I’m still working on my app, but now only during my lunch breaks, well most of them. I’ll give you updates on that on another day.

Oh, by the way, that cup in the picture… it’s the cup I got when I started at my last job. I received that sticker during my new job’s new employee orientation. It actually has the company name underneath the saying – I’m hiding the to keep some privacy in my life. I really like the color of the mug and it has my name on the other side and well… it makes me smile when I look at the sticker. 😆

2 thoughts on “You Can’t Control Life, Only Your Attitude Towards It”