Thought of the Day…Without question, the greatest invention in the history of mankind is beer. Oh, I grant you that the wheel was also a fine invention, but the wheel does not go nearly as well with pizza. ~Dave Barry 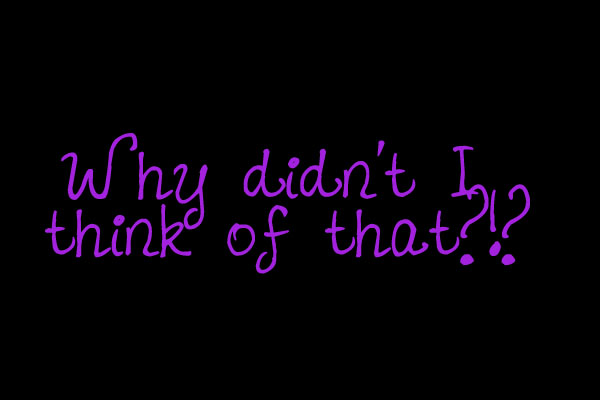 OK, have you ever seen or heard of things and thought… Why didn’t I think of that? I do it all the time.

Like Snuggies… how simple is that??? A blanket with sleeves… WOW… that’s simple… now they have them with pockets!! I read somewhere that over 4 million have been sold. WOW!

The iFart app… there’s an iPhone app that makes farting sounds… just like a whoopee cushion… The authors sell it for 99 cents and they sold hundreds of thousands copies in just two weeks netting them $40,00 — that was in 2008. I can only imagine how much they’ve made since… all from an iPhone app that sounds like farts! Go Figure! Why didn’t I think of that? I had cousins growing up obsessed with farting and Hubby receives cards from family members about farting… so it’s not something that’s foreign to me… Why didn’t I think of that?!?

I read several blogs and Jaden over at SteamyKitchen mentioned a Cheat Sheet Apron in her Fun Finds on the Web post. It’s an apron that has all those helpful reminders (cooking times, measurement equivilents, etc.) UPSIDE DOWN so the wearer only has to lift the bottom of the apron to read it! Again… why didn’t I think of that?!?

If you haven’t seen the A&E reality TV show Gene Simmons Family Jewels you have to watch it… Gene Simmons (yes, from the rock band KISS)… At the beginning of the episode his daughter and “wife”/significant other were watching a plumber work on their dishwasher. MAJOR PLUMBER’S BUTT! They commented on why there weren’t hot looking handymen… His daughter is working on a school project for creating a business and she created Hunks with Hammers. They had several hunks interview – which included taking their shirts off and showing their muscles! You can watch the episode on A&E’s web site: http://www.aetv.com/gene-simmons-family-jewels/video/?bcpid=58345455001&bctid=260859762001 Again, why didn’t I think of that?!?

Are there things that you see or hear about and say to yourself, Why didn’t I think of that?!?