I received the following via email from someone very close to me. I have permission to post this. Please pray for them to have peace. I am more than thankful that he is OK. Things can be replaced, he cannot.

I was sitting in quite rural living room having just finished Christmas decorations. The tree lights were on and candles lit waiting for my husband to come home from a five day work trip. He had called from a larger town an hour earlier and was due ANY moment. In fact, he was fifteen later than I expected. I figured that he was being cautious with the old black F150 and sixteen foot trailer. My phone rang from a local number I did not recognize.

He was calling me from a farmer’s house about six or seven miles away via gravel and black top – the back way. The truck had been giving him trouble and had finally just quit. When he stepped out to look under the hood he didn’t realize he would need his phone, coat, hat, gloves and keys. He heard some snapping and crackling and saw a small flame magnifying quickly. He ran. He had not gone 150 feet when the flames illuminated the night sky. 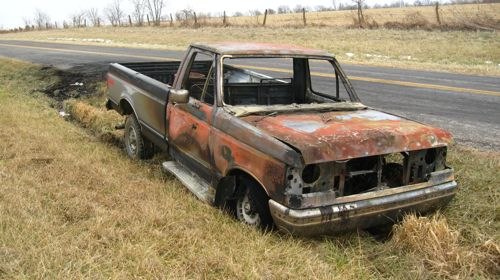 The farmer, whose house was close to the truck, called the fire department. The volunteers arrived in quick order and were able to save the trailer. It was great that he was so close to home and still on the black top. That allowed them ready access without having to hunt for him and was a straight shot from their community base. Better still is that the guys knew him and I had met several of them, also! What comfort it is to hear someone call you by name at the scene of an emergency. One of them had the same size hitch ball and brought the trailer to our yard when the fire they were able to leave the scene. I, too, had been at my husband’s side within short order of his call.

The truck was completely engulfed and three tires are completely gone and most of the fourth one. We lost some stuff in the back, like fruit cakes, three big Topsy’s popcorn cans (My son says “charcoal” flavored.), a drill, dirty laundry, my new Rxs and his two travel duffel bags which had his BP cuff and meds, plus the stuff inside the cab. All in all, we were blessed in so many ways. 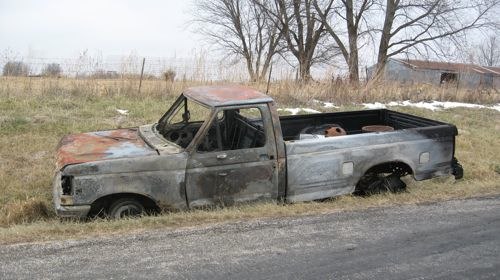 He has gone now to pick up new meds. We will evaluate everything in its time. Our Verizon store is out of his phone, but we do have the replacement agreement with them. They have ordered one overnighted for us. We want to see if he can salvage the trailer hitch and look for any keys that might have survived. Anyway, keys will probably be the next thing to address. He is not sure what was in the truck and what might still be in our old house. At least we have my set for houses, cars and mailbox. The tractor and ATV keys will likely need to be ordered if we don’t find them at one of the houses. 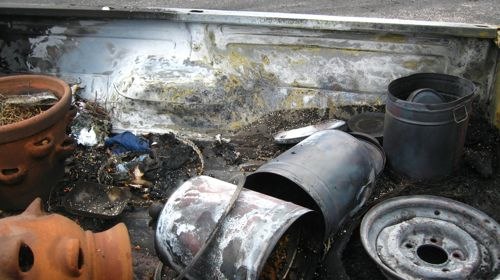 Because of the age of the vehicle we did not have anything but liability. The total financial losses are not monstrous. Yes, we will need to do some irregular things in our daily activities in order to “recover,” but the great thing is that WE CAN. We can adjust our lives. He was not injured or killed. It was close, we were surrounded by friends and neighbors. Our losses are moot.

Oh, yep, he loves Christmas because of the bright, pretty lights. He had asked me a couple of times when I was going to put up the tree. Of my five day chore list to accomplish while he was gone – I did complete that one! I like to think it will help him resolve and repair.

Thank you so VERY VERY MUCH for your prayers.

3 thoughts on “Miracle and Prayer Request”