The other night was sitting on the couch and heard a bug bouncing on the ceiling – you know the sound… like a moth or fly. “UGH!” I instantly thought of Emily’s Tweet about moths being dusty… She Tweeted this last week:

my brother is the smartest person i know. this AM, he told me why moths are dusty..

When I asked her why she tweeted back:

@tmtdslt apparently the dust is actually tiny scales, like on a fish, that they shed when touched. both interesting and gross.

I knew The Offspring doesn’t like moths, so I got up to get it. Then I saw this creature which was as big as a wasp. CRAP! I went to get the fly swatter and then I froze and then jumped for joy and got supper giddy!

YEP… excited and giddy over a bug continually bouncing off my ceiling!! This was not just any bug… this was a very special bug!

I started talking to it and actually said, “Don’t you worry, I’m not going to kill you! I am going to rescue you and take you to your new home.”

I went to the cupboard and grabbed a one-cup bowl, lid, and a blueberry from the compost pail… then a chair and climbed up on the chair – taking care to NOT fall off of it in my excitement. (just what I need another fall, eh?)

Here’s what I trapped… This is a Black Soldier Fly (BSF). It’s my FRIEND! You can see how bit it is compared to the blueberry… 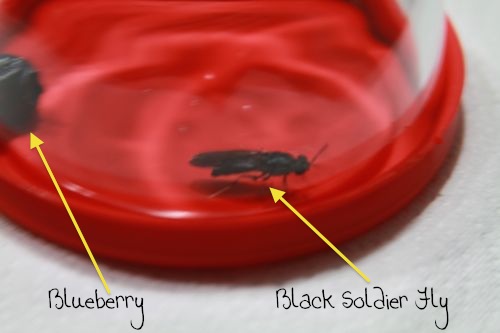 This was my first sighting this season. I was so excited that I texted my friend Dude to let him know…

Afterwards, I took him/her out to my new compost bin and dumped him/her in… and quickly closed the lid.

I have been composting for over two years. These creatures are amazing!! They are much bigger than a “housefly” but serve a REAL purpose! They turn my kitchen scraps into wonderful compost! Last summer I saw with amazement how they devoured a rotting cucumber in less than two days!

According to http://www.blacksoldierflyblog.com the adults only live a few days (5-8) – long enough to mate and lay eggs then they die!

It’s so amazing to LISTEN to them… when I have a full colony going, I can here a “sucking” sound coming from my compost bin! Kind of like the sound you hear when you step in a puddle of mud and then move your foot up and down.

Once my BSF colony gets going, I am going to do an experiment. I want to time them devouring scraps – too bad I can’t setup my video camera… wouldn’t you just LOVE to watch it?!?

Do you have Black Soldier Flies in your compost bin?