Yesterday morning, I was lying in bed after enjoying my extra hour of sleep – YEAH “fall back”… boooo no more sunlight going to-from work (wait who am I kidding, most of the fall/winter we don’t have sun so what does it matter? Strange, it does matter that I know there is sun behind all that grey and clouds… driving to-from work in the dark sucks! But that’s what I get for living north of the 45° parallel!

Wow… I seriously took a wrong turn in that opening paragraph! Please forgive my A.D.D! Now, let’s get back on task…

Yesterday morning I was lying in bed, after enjoying my extra hour of sleep, I was looking at email on my iPad and then when I closed it I saw an icon in one of my “Cooking” folder that I didn’t recognize. 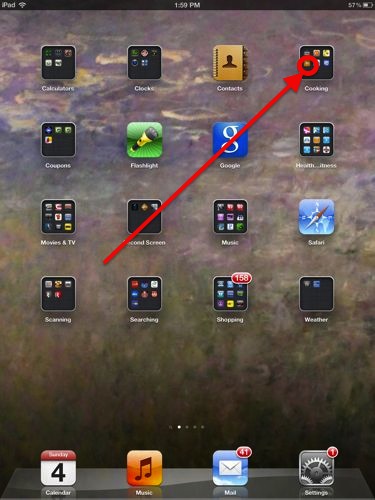 OK, that may sound strange, I mean it is MY iPad… shouldn’t I recognize the app icons? So I opened the folder and took a closer look… 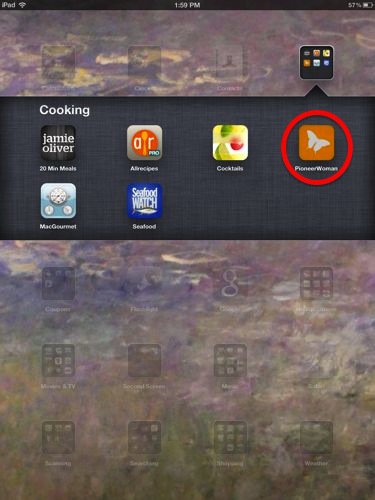 Still can’t read it? Let me zoom in for you…

I didn’t realize that Pioneer Woman app icon had been updated. I felt really silly! Since I really hadn’t looked at the app for quite a while and nothing really pressing to do, so I clicked on it. (clicked… sounds kind of funny given there is no “click” with an iPad – oh… I digressed AGAIN! Sorry!)

Anyway, I had not used her app in quite a while because the last time (months ago) I used it I was disappointed. Keep in mind that the app is an “unofficial” PW app. I got the app when it was first introduced. It was written by, I believe, a 15-year-old. It was “OK”, but I had too many issues with it.

I haven’t taken a good look around the app yet, but I will and I think this time I will write a review on it. That’s not what this post is about so I don’t want to get diverted (again). 😉

When I opened the app, her blog posts were displayed. I had seen almost all the ones first displayed (which was a nice surprise for me).

It used to be that I felt that “my life wasn’t complete unless I had read Pioneer Woman’s blog posts”. Actually, hers as well as my other favorites. Life has just been insane for oh soooo very long that I just haven’t been myself for quite some time. (I’m sure you’ve noticed.)

What I did find as I was flicking through her posts was that I really miss taking the time our of my day to read hers and my other favorite blogs. It was my “me time”. Had I actually been doing that I wouldn’t have missed her post entitled, “Silver Dollar Pumpkin Pancakes”.

There is a restaurant near us that serves my favorite pancakes – sweet potato pancakes. Pumpkin is my second favorite. Finding a good sweet potato or pumpkin pancake recipe is something I have been in search of for YEARS.

I talked with Hubby and instead of breakfast we decided to have breakfast for dinner. I made PW’s Silver Dollar Pumpkin Pancakes for dinner last night. It took FOREVER. Her recipe reads “10 minutes” cooking time… nope… it took me nearly 2 hours to make all of them!!! Silver Dollar ones take FOREVER because there are so many! I had 10 CUPS of batter to cook! UGH! 🙁

Mine looked awful. Thin and flat. I felt I had failed until Hubby said they were good and that he’d like them again. 🙂 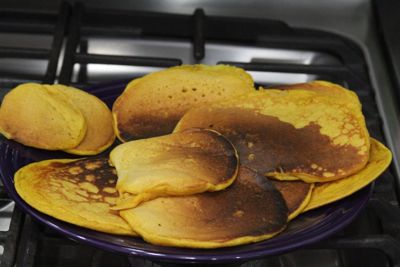 OK, so they may not look like the nice beautiful stack Pioneer Woman had, but they DID taste good. Although not “pumpkiny”. I expected more flavor. Maybe I should have put in more pumpkin pie spice than she called for in the printed recipe. Her blog post says to “sprinkle some in”. I don’t know… maybe it’s just me.

Also, I was disappointed because for years I have struggled with flat non-fluffy pancakes. Hubby suggested I “Google it” and I planned on doing just that. But since I was done washing dishes and still had several more pancakes to make, I grabbed my Joy of Cooking cookbook and looked up pancakes and on page 643 found my problem:

”There are three equally important things to control in producing pancakes and waffles: the consistency of your batter, the surface of your griddle, and the evenness of its heat. Mix the liquid ingredients quickly into the dry ingredients. -> Don’t overbeat. Give just enough quick strokes with a whisk to barley moisten the dry ingredients. -> Ignore lumps. Superior results are gained with most pancake batters if they are mixed and -> rested, covered and refrigerated, for 3 to 6 hours or longer before cooking. The resting period does not apply to recipes that include separately beaten egg whites or to yeast-raised griddle cakes that have the word ‘raised’ in the name.”1

It goes on to explain testing and batter thickness. (Note: the arrows “->” were shown as arrows and are noted as “Pointers to success”.)

Well… after YEARS UPON YEARS of doing it WRONG I have now learned… don’t overbeat OR work batter until there are no lumps!!! I always thought that the lumps would make it so you would be biting into dry ingredients. So, I will let you know how it goes next time!

So what does all this have to do this post’s title “Is a change coming”?

If you haven’t noticed, I have been trying really hard to post regular posts. After several months of not posting (or reading others’ blogs) I am striving to be better. I have posted many more posts in the last month than I had in the previous four months,

So the “change” is that I have had several posts in my head and partially started for some time. I am bound and determined to get them posted. I still have to complete the posts about our trip to Seattle – from September!

As for reading my favorite blogs… I need to accept the fact that I am “behind” and start fresh. Then work my way backward as I can. I have so many months to get caught up on reading and getting them all done is likely not going to happen anytime soon. I will also do my best at writing comments. I do know we all love comments. Some blogs are really hard for me to comment on using my iPad or iPhone which is what I have with me during my lunch break. Sorry!

So, here is to “new beginnings” and “change”… Cheers!

Are you ready to continue on this journey with me?

2 thoughts on “Is a Change Coming?”