Last week I told you about my new job. In addition to having to buy new clothes since we can’t wear jeans to work except on Fridays, I decided that after being unemployed for eight months, I decided a reward was well deserved. Nope, I didn’t take myself out for dinner and drinks…

I bought myself something I have wanted for a LONG time… a Vitamix 6300! 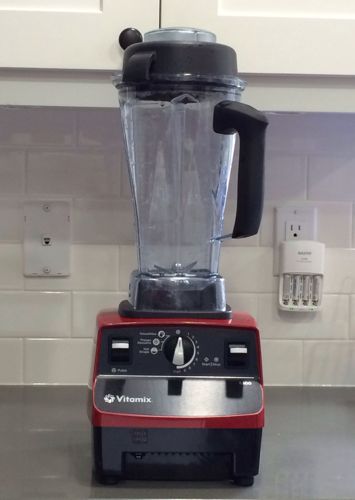 I have often seen the Vitamix Costco “roadshows”, but always just walked past because the price was too high. Costco sells the Vitamix 5200, but they have the 6300 during the roadshows. I wasn’t sure if it was “worth” the price. So, I reached out to my friends Brent and Kate to find out war they thought. I know they used to own a coffee shop “way back when”. Both had high praise so I couldn’t resist. 😉

I called Vitamix to ask what was the difference between the 5200 and the 6300. The 6300 has three presets: Smoothie, Frozen Desserts and Hot Soups. YEP, soups. We’ll talk about that on another day.

I can’t wait to share with you all the cool recipes I have made. I will even share my experiment failures. I also plan on doing posts on recipes I find on Pinterest. I’ll share with if the pins are worth re-pinning. 😉

The only downside I’ve found so far is storage. As you can see from the picture above, it is too tall to go under my cabinets. Instead, I only keep the base on the counter and the container in the cabinet or on the drying rack.

The Offspring loves using it, too. She made smoothies almost everyday before she went back to college. I’d say it was worth the price because the smoothies are FAR better than with my old machine. 😉

What do you use to make smoothies?